PhysTEC Teacher of the Year

The PhysTEC Teacher of the Year program recognizes outstanding high school physics educators who demonstrate the impact and value of physics teacher preparation programs. Each year, PhysTEC member institutions submit their recommendations to the selection committee, and one National Teacher of the Year and several local teachers of the year are selected.

Matthew Blackman of Ridge High School in Basking Ridge, New Jersey was named the 2019 PhysTEC National Teacher of the Year.

The selection committee noted his efforts to dramatically increase AP Physics enrollment and scores over his 10 years of teaching the subject. Specifically, he worked to improve the percentage of female students taking AP Physics, increasing it from under 20% to over 50%.

Outside of Ridge High School, Blackman teaches graduate courses in the Physics Education master’s program at Rutgers University (of which he is an alumnus). He also launched a successful professional development summer workshop for physics teachers, which has grown from eight participants to over 20 per year.

In his spare time, Blackman is a self-taught coder and designer of video games; he has built five educational physics games to help students explore the concepts of kinematics, circuits, waves, and electrostatics. His 501c3 nonprofit, Universe and More, develops and distributes the games, which are free-of-charge to play (and always will be). The games have received millions of plays, and are used by teachers in all 50 states and over 60 countries.

Recently, Blackman was recognized by the New Jersey Senate with a Congressional Resolution honoring his achievements in the classroom, including the creation of educational games and coaching FIRST robotics. 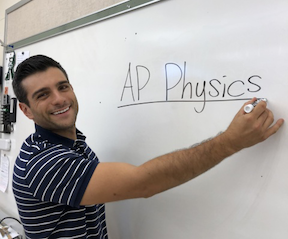 2019 Local Teachers of the Year

In addition to Blackman's selection as the National Teacher of the Year, we congratulate and thank the following Local Teachers of the Year, who strengthen the physics community by cultivating scientific curiosity in young minds.

Teacher of the Year Selection Process

Teacher of the Year nominees must be:

You’ll get PhysTalk, our monthly newsletter, and other occasional updates from PhysTEC.